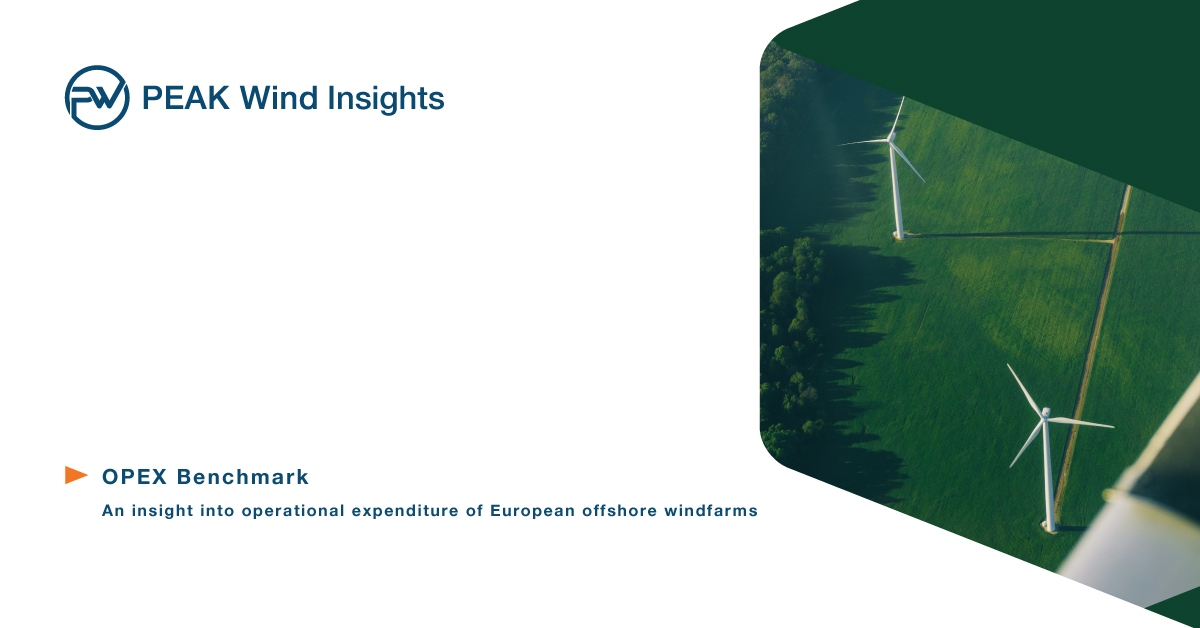 This article presents and discusses Operational Expenditure (OPEX) levels from 47 operational European offshore wind farms based on an analysis of publicly available accounts, i.e. it is based on actual operational figures.

The purpose of the analysis is to shed light on main mechanisms and trends related to OPEX levels and their drivers, which account for around 25-35% of the Levelized Cost of Electricity (LCoE) of modern offshore wind farms. Key results show that:

What is the methodology behind the analysis?

Many offshore wind farms are structured as separate companies requiring them to provide annual financial reports which are freely accessible for several markets. Hence, the data within these reports can be obtained, cleaned, consolidated, and analyzed. As the annual accounts for 2019 have not yet been published, the most recent data included in the analysis is from year 2018. Of course, the financial data only paints one picture, hence in order to add further angles and perspectives, and to consequently allow for benchmarking, the financial information is paired with wind farm characteristics such as installed capacity, OEM, turbine type and geography.

An overview of some key figures behind the benchmark is presented below:

Figure 1: highlights of the dataset

This data can be applied in countless ways; thus, this article will present a selection of the most relevant. Upon request, other analyses, and Key Performance Indicators (KPIs) can be provided.

Comparison across different project sizes and turbine types, etc. can easily be skewed if it is not based on the right metric. To allow for direct project comparison across different project characteristics, the analyses provided within this article will focus on the OPEX/MW/year metric. This also enables comparison between projects in different phases of their lifecycle. Figure 2 below, which provides an ordered lifetime OPEX profile for the 47-project sample, shows a clear downward trend with an average year-on-year decrease of 3.7%. Except for a spike in year 8 and 10, there is a clear trend for OPEX to decrease. It should be noted that the population of projects included in the sample decreases towards higher operational years (OY) as the industry is still young. The uncertainty in datapoints is therefore higher than for early operational years (see the “sample size line” in Figure 2). 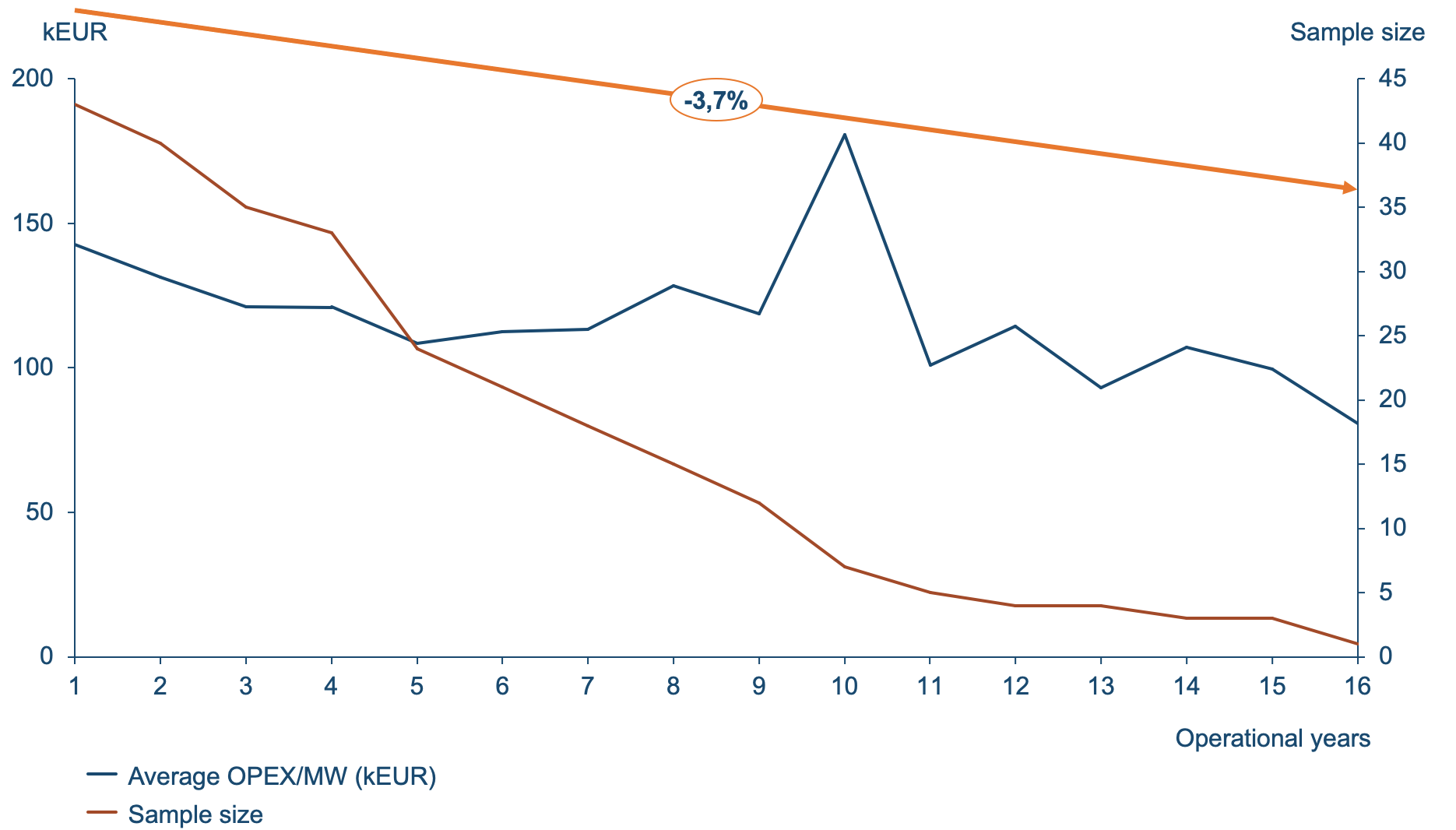 The spike in year 10 could suggest that the turbines require a significant amount of service and maintenance.

There can be several explanations behind the development, but it is not unlikely that the decrease in OPEX is a direct result of operations learnings, retrofits, improved ways of working and technology advancements. From PEAK Wind’s operational experience, during the first few years of operations, a project might experience “start-up difficulties” that have a negative impact on the general operations. Over the years, however, these obstacles might be overcome, and furthermore, the O&M strategy might be refined and optimized which consequently leads to better performance and lower OPEX.

It will be interesting to follow the further development and see if there will be an upward trend (higher OPEX due to higher failure rates as many scientific sources suggest) towards end of life of the projects. In general, no further increases are expected, and except for an occasional spike in the later years related to major overhauls or similar significant maintenance operations, the overall lifetime profile is expected continue to follow the trend depicted above, based on the information available today.

Yearly OPEX/MW levels differ from country to country as can be seen in Figure 3 below which presents an overview of the average lifetime OPEX/MW/year levels for all the projects within the five different countries included in the dataset Furthermore, it indicates the sample size for each country, e.g. the average for Danish countries is based on three projects, while the UK sample is based on 25 accounts. 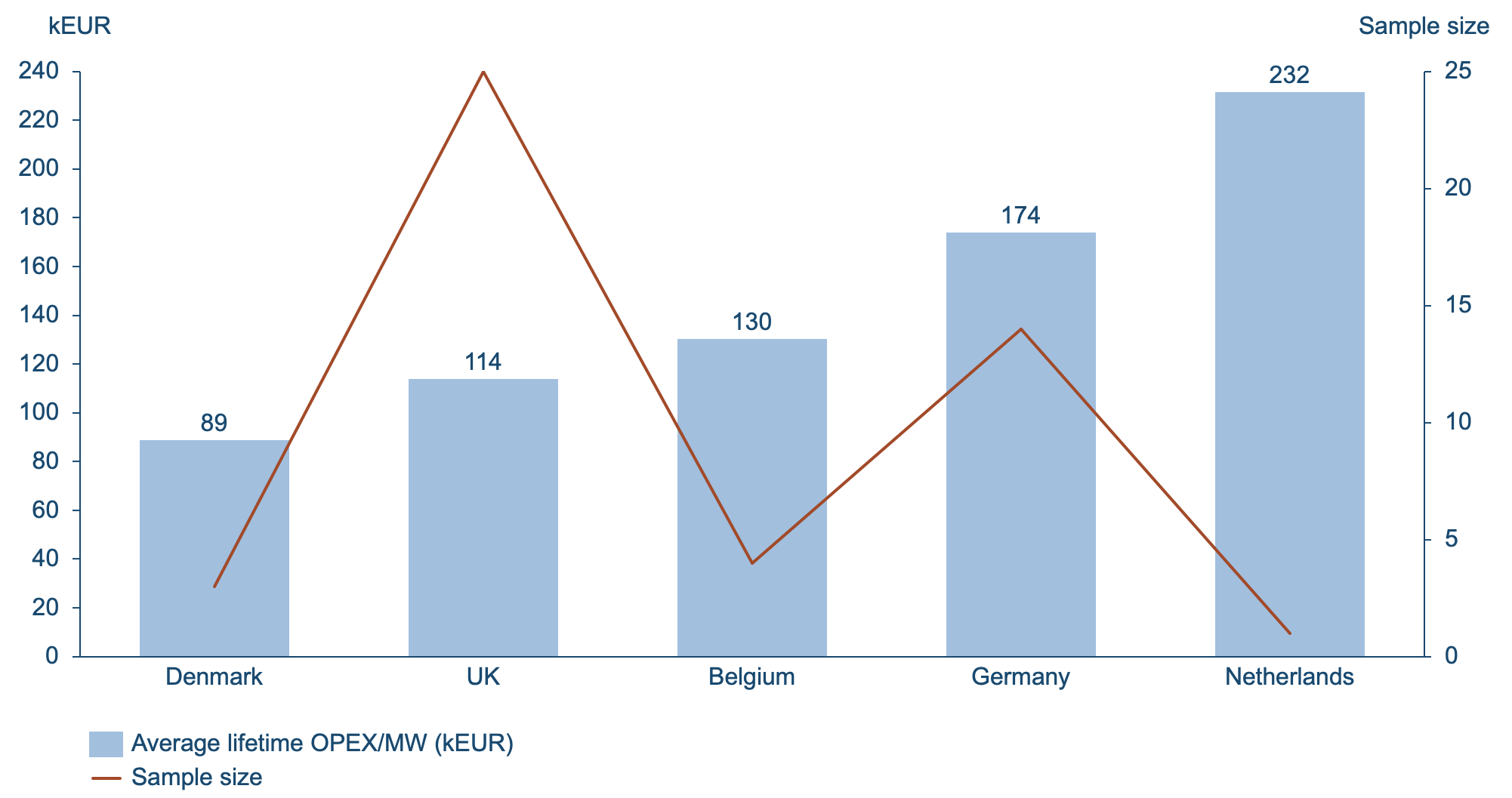 When it comes to comparing OPEX levels across countries, it is important to be aware of the legislation and other country specific dynamics of the country in hand. For instance, in the UK, wind farm owners must pay fees to the Offshore Transmission owner (OFTO) and seabed lease fees to The Crown Estate, whereas the Danish projects on the other hand pay no such fees. For this analysis, the UK OPEX/MW/year figures have been cleaned from OFTO transmission charges. The generator also has a slightly different asset base to operate in the different countries – some include transmission assets while others do not.

It shall be noted that UK and German sites make up most of the total sites included whereas Netherlands, Belgium and Denmark constitute less than 20% of the total sample.

A statement often heard in the industry is that larger turbines reduce the OPEX for a project, i.e. a larger turbine would lead to a lower OPEX per installed MW capacity compared to a smaller turbine. The suggested reduction results from less service requirements, relatively fewer components to be replaced and corresponding savings in materials, logistics and personnel required. While this statement might be generally true, when looking at the lifetime average OPEX/MW/year for each range of WTG size, Figure 4 below presents some interesting findings. 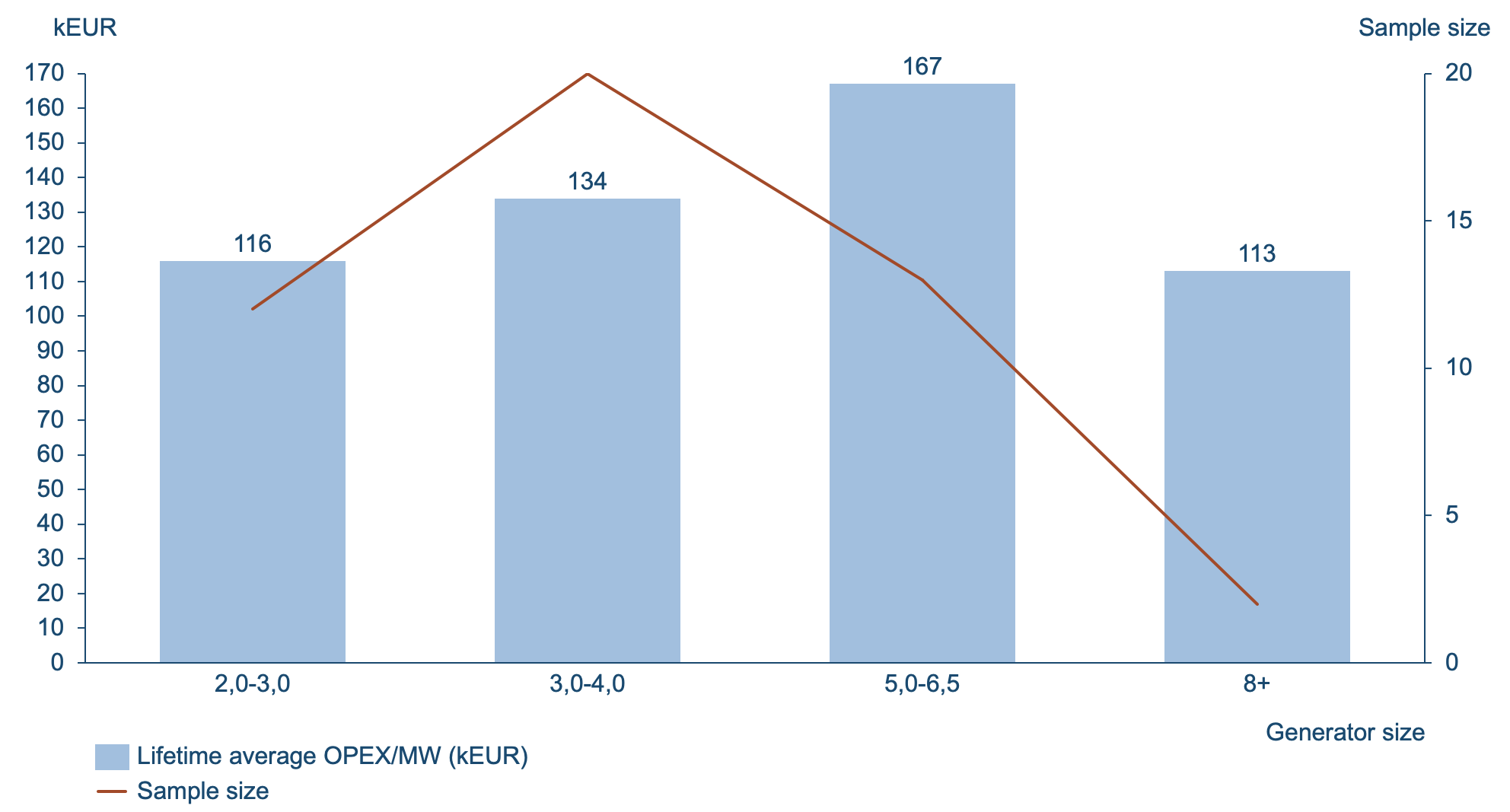 The graph shows the turbine generator size along the horizontal axis, starting with the smallest generator and ending with the largest while the average OPEX/MW/year for each is depicted on the left vertical and the sample size on the right vertical axis.

Contrary to the statement above, for the lifetime averages, there does not seem to be a clear relationship between generator size and OPEX/MW/year as the values gradually increase with the turbine size from 2,0-6,5 MW only to greatly decrease for the 8+ MW category. Given the nature of the dataset, many of the WTG types are only installed at very few projects, and furthermore the wind farms included are in different phases of their lifecycle; i.e. the previously described effect of OPEX reductions over lifetime (Figure 2) might play a role for that picture. For instance, the category 5-6.5MW machines are dominated by OEMs that have discontinued their offshore turbine line, whereas the number of sites with 8+ MW turbines is not only limited, but also in early operational years. Thus, the graph depicts a highly interesting, but only a snapshot picture that cannot reject the industry belief that larger turbines will in fact lead to lower OPEX/MW levels.

Which offshore wind farm has had the lowest average OPEX/MW/year over its lifetime?

Thus far the article has focused on lifecycle, country, and WTG size, however, another relevant aspect is how the OPEX/MW/year compares on project level. Hence, Figure 5 below shows a boxplot of the OPEX/MW/year for each project included in the analysis. The boxplot indicates the distribution of realized OPEX throughout the lifetime of the project. The boxes cover the 2nd and 3rd quartiles of the dataset. The lines inside the boxes indicate the median and the dots indicate the mean values. The outer whiskers represent maximum and minimum occurred OPEX/MW/year for the given project. The average variance within a project between the lowest and the highest occurred OPEX across all projects is 94%.

As this article is available for free, only the project with the lowest OPEX/MW/year is listed by name. If you would like to unlock the full range of project names, please reach out to discuss further. 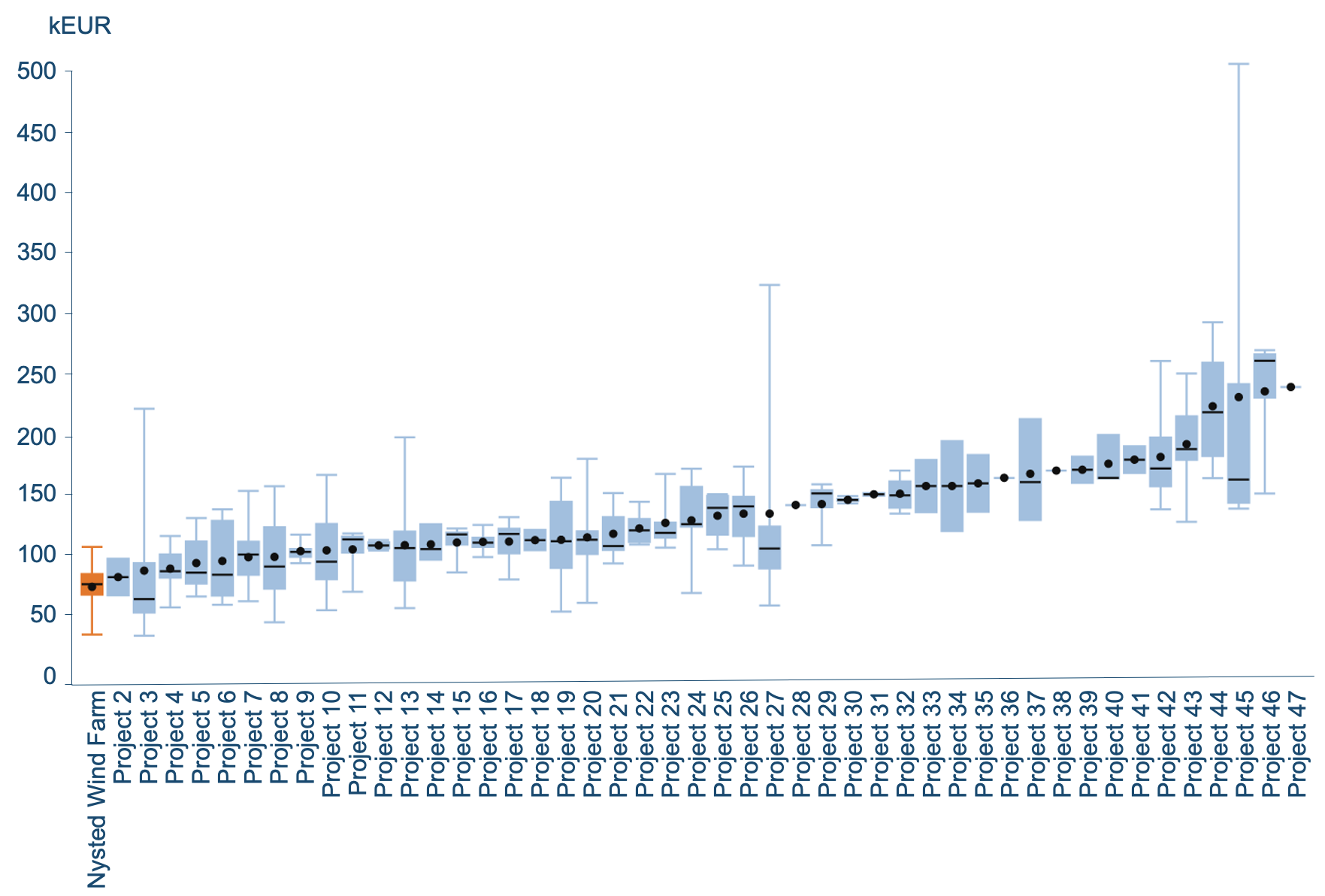 Out of the 47 projects included in the dataset, the best performing project from a cost perspective over the lifetime is Nysted Wind Farm with an average expenditure level of 75kEUR/MW/year. The project averages are ranging from 75kEUR/MW/year to 240kEUR/MW/year. The highest intra-project OPEX spread is observed at Project 45  which ranges from ~140-500kEUR/MW/year.

Although there is a great variance between the best and worst performing project, the projects in between show a gradual increase. Combining this with the overall sample average of ~118kEUR/MW/year, the projects can be bundled into the following ranges: High performers, medium performers, and low performers:

There can of course be several underlying reasons for why there is such a great variance between the projects, such as distance to shore, price/length of the service contract, logistical setup, reliability of the wind turbines and balance of plant setup and country legislations. Nevertheless, it is thought-provoking to see such large deviations.

How will OPEX/MW develop in the future?

To conclude this article, the following section contains a discussion about how OPEX is expected to develop in the future from PEAK Wind’s perspective.

Based on the information presented throughout the article, the following conclusions have been drawn:

A third aspect that has not yet been explored is the impact of increasing the installed project capacity. As offshore wind is expected to grow tremendously over the next decade and onwards, there will not only be more projects installed, they will also be substantially bigger, using fewer and larger turbines. Thus, Figure 6 below highlights what the average lifetime OPEX/MW/year has been across different wind farm sizes.

As can be seen, the OPEX/MW/year has a slightly decreasing, almost flat trend line. However, some of the larger wind farms have just been constructed within the last few years, meaning further improvements should be expected in the future, thus lowering the OPEX/MW/year.

Several consented wind farms in either the development or even the construction phase are already way past sizes of 1000MW indicating that even lower OPEX levels than what is shown here can be expected in the future. Furthermore, these planned projects will make use of turbines of 10+ MW generators, greatly reducing the number of turbines required compared to what has been installed so far.

That means that even without taking into consideration increased competition between service providers, improved supply chain, technology developments and general efficiencies, there are already several major factors pointing towards lower OPEX. Considering the above presented analysis, PEAK Wind considers OPEX reductions of 20-40% from the basis of today’s best-performers feasible when moving into the 12-15MW turbine class in mature markets.

This article only includes a fraction of the dataset analyzed and mainly focuses on the OPEX/MW/year part. On top of this, PEAK Wind has data available to conduct performance analyses and benchmarks across projects on other metrics such as power generation, revenue, EBITDA, CAPEX etc. Note, that currently, the dataset includes data up to year 2018, however, it will continuously be updated with new data, and annual accounts for 2019 will be added once available.

To gain further access to the data and other metrics, please feel free to reach out to discuss further. We are always happy to answer your questions and develop bespoke benchmark analysis.

Below are our readily available metrics derived from the dataset: 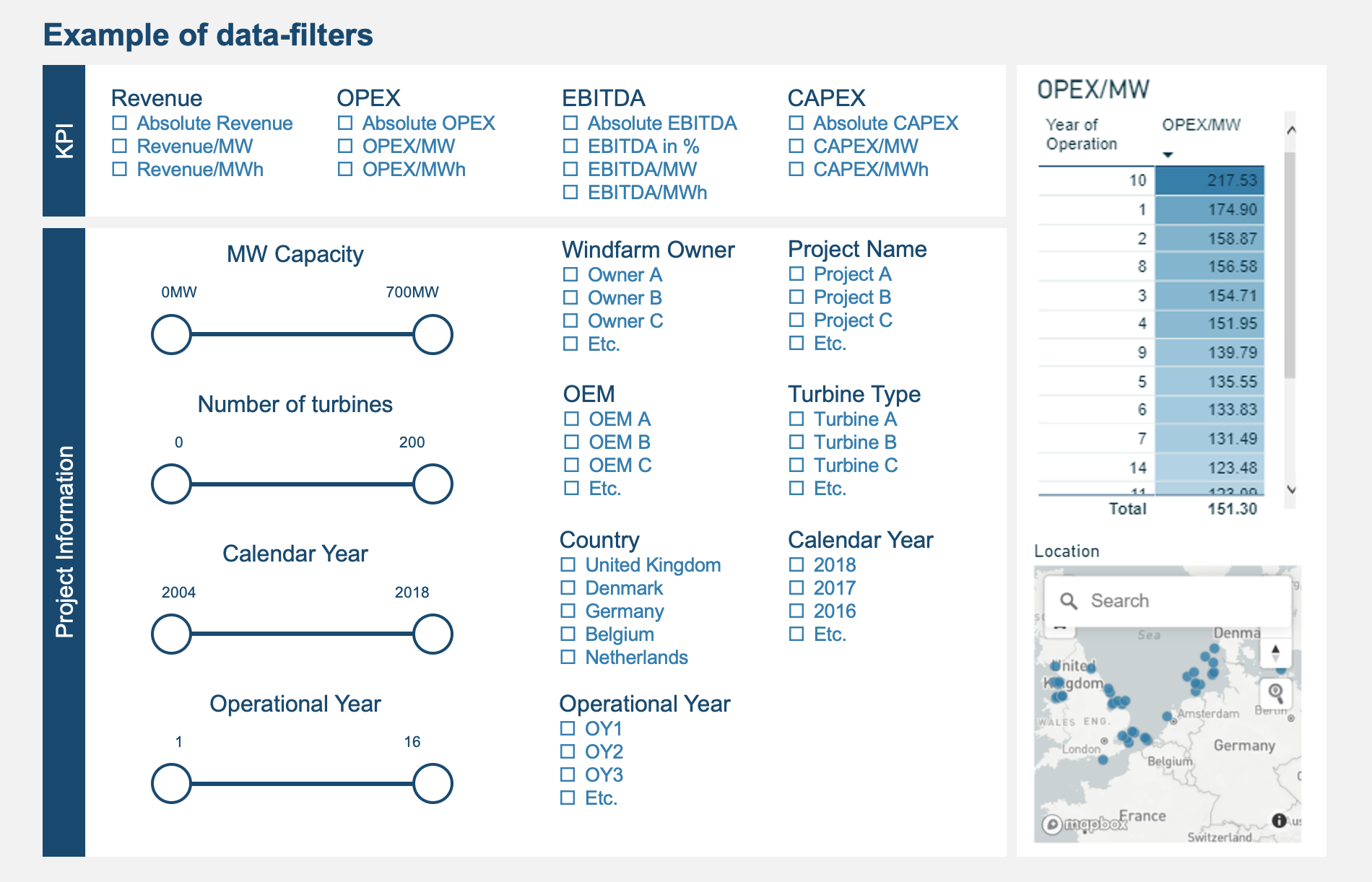 The four overall KPIs (revenue, OPEX, EBITDA and CAPEX) can be extracted and filtered based on numerous types of project information listed above. For instance, a comprehensive OPEX report can be created showing OPEX/MW based on any combination of calendar years, operational years, project name, country, OEM, WTG or MW capacity. The same goes for all the other KPIs.