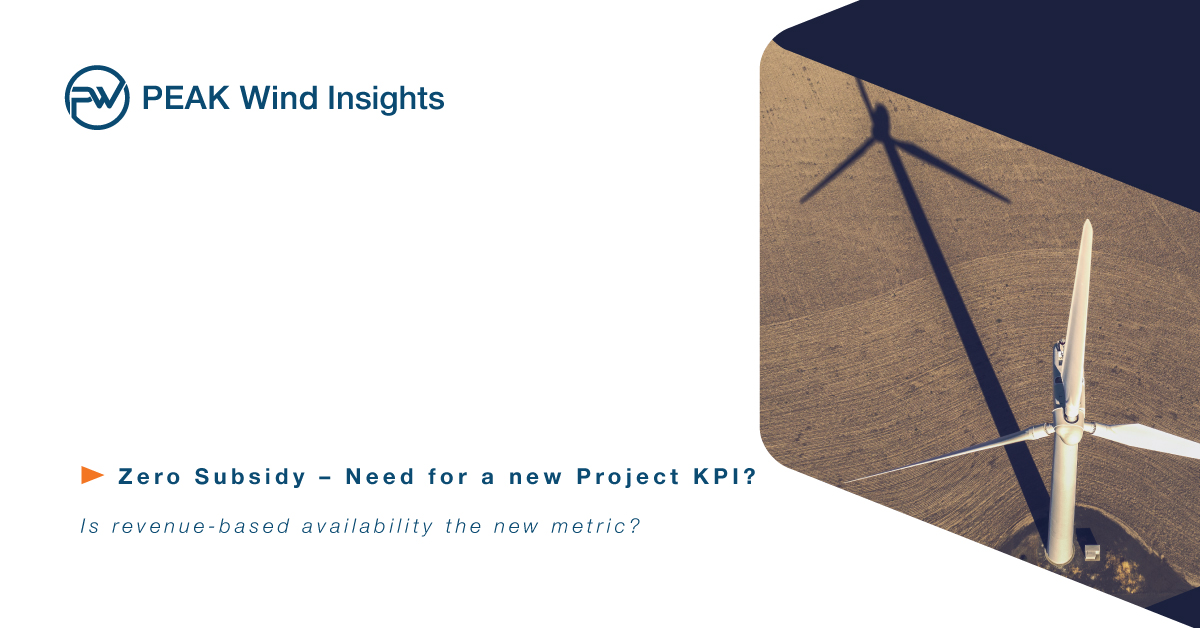 This article explores the reasons why wind farm owners should consider a revenue-based availability KPI for projects under a zero-subsidy scheme.

Is revenue-based availability the new metric?

During recent years, there has been an impressive de-risking of the offshore wind technology, driving LCOE to historically low figures. Whether this has been the cause or the driver for increased competition in offshore auctions across Europe, the visible outcome is the birth of zero-subsidy offshore projects in the main European markets. A total of 8.8GW of offshore capacity has been awarded without any subsidy – Germany (1.8GW), the Netherlands (1.5GW) and in the UK (5.5GW). In addition, those wind farms that are currently still being financed will eventually fall out of the subsidies, as they are only granted for a specific period.

A zero-subsidy bid is supported not only on the clustering and scale effects that some players are securing in the European shores, but also from the positive forward-looking assessment of how technology and O&M cost will evolve. It’s with this outlook that offshore developers are setting sails towards a new merchant revenue environment with full exposure to pool power prices. In order to survive the market waves, players need to carefully control their margins – managing revenue and OPEX in an integrated fashion.

How players decide to manage merchant exposure is directly related to their risk-aversion profile. Some players will prefer to hedge their revenue line while others will try to optimize their OPEX cost profile to better reflect their revenue risk. The latter option requires unfolding new optimization levers in O&M, which require the onboarding of turbine and BOP contractors.

Do we need a new Availability KPI for renewable resources?

One of the key indicators measuring performance of offshore wind assets during operation is availability, which has been historically defined as the proportion of time a turbine is running over a defined interval (time-based availability). As wind speed fluctuates over time, downtimes during windy periods result in a higher yield loss as compared to downtimes in windless periods, therefore a different definition of availability has become established in the industry – the actual generated electricity over the theoretically producible electricity in a given period (yield-based availability).

In a merchant world, however, are these concepts of availability giving the right incentives and allowing projects to secure long-term profitability levels? Shouldn’t availability in this context consider not only yield but also price movements in the market?

We can breakdown a project revenue in a given hour h into three components, as shown below:

Up until very recently, the power price (once a tariff had been awarded) would be a fix component throughout most of the project’s lifetime, therefore developers only focused on yield as the main project KPI. With a fixed energy price, optimizing downtimes under O&M campaigns would guarantee revenue maximization. However, in a zero-subsidy context, the power price is a volatile element and a yield-based availability no longer guarantees revenue maximization, as we shall see in this article.

A new O&M strategy should therefore be optimized with revenue as reference rather than on the pure amount of electricity generated. A new and more relevant definition of availability could now be pursued for zero-subsidy projects: revenue-based availability.

At this point, the critical challenge is threefold. Firstly, understand what are the key drivers that underlie revenue volatility going forward as well as what is the possible value of moving to a revenue-based availability KPI. Secondly, investigate what practical strategies do developers have in order to maximize their EBIT margin in a merchant setting. Thirdly, define how can developers implement these strategies under their SMAs and PPAs with best possible alignment from OEMs and off-takers.

Should developers care about market price dynamics or focus on maximizing production?

In a merchant context, developers should aim at maximizing production in those settlement periods when it is most valued. There are three key features of market prices that influence the developer’s revenue risk profile:

To further investigate, let’s look at two markets where renewable energy represents a different share of the national generation mix – Germany and the UK. These two markets represent two different stages of renewable resources penetration in the power system and therefore allow us to analyse the implications of exposure to different levels of price volatility.

Figure 2 below shows the monthly profiles of each revenue component for an average offshore wind project and gives key statistics for each market in 2018.

A higher percentage of (intermittent) renewables assets in the energy mix has clear implications in the behavior of market prices and project revenue. Under a fixed tariff scheme (or with a stable market price), the project’s revenue would be as volatile as its hourly production profile. Considering the coefficient of variation (i.e., the ratio of the standard deviation to the sample average) as a possible measure of volatility, revenue would have similar volatility both in Germany and UK in 2018 (66%). Moving into a zero-subsidy scheme, project revenue becomes contaminated by the market price volatility. And the higher the renewables integration in the mix the higher will be the market price risk, which translates into a riskier intra-annual revenue volatility (77% in Germany against 69.7% in the UK).

The correlation between wind production and market price becomes more negative as the volatility in market price increases due to more intermittent renewable assets in the generation mix.

Ceteris paribus, a double cannibalization effect is triggered as more renewables are connected to the grid – (1) with a zero short-run marginal cost, renewables tend to put downward pressure in market prices in the long run (scale effect), and (2) with higher negative correlation between production and market price, the spread between the average market price and the (lower) price captured by the project increases (intermittency effect). The average intermittency effect in Germany and UK during can be seen in Figure 3. We would expect to see UK’s intermittency effect to increase going forward as the share of renewable assets in the generation mix increases and price volatility converges to the levels seen in Germany.

Additionally, O&M works planned to achieve a given level of WTG time or yield annual availability tend to maintain or increase the intermittency effect by neglecting the critical relationship of market price and revenue under a merchant context.

Figure 3. Intermittency Effect and Price Volatility in Germany and UK.

What is the value of setting revenue based KPIs in key project contracts?

So far, the clear take-away seems to be that if prices are stable then optimizing production is close to revenue optimization. However, due to the higher penetration of intermittent resources, the exposure to increased price volatility is likely to increase the need for revenue based KPIs across key project contracts.

In order to further investigate, let’s compare the traditional availability concepts with new revenue-based KPIs and estimate what could be the hidden gain for the average offshore wind project. Figure 4 provides an overview of the relevant concepts.

The Low Revenue Month (LRM) setup seems to be the easiest and most straightforward revenue-based concept to implement given current O&M industry practices. It simply requires the operator to shift O&M works to the month where revenue is expected to be lower (instead of yield).

The Hourly Optimization (HO) setup represents the most valuable revenue-based concept as well as the most challenging to implement. In this case, the asset owner maintains a continuous forward-looking forecast on hourly prices and wind generation to identify profitable time windows to deploy O&M works. In a highly volatile market, the flexibility to deploy, postpone or switch O&M campaigns provides revenue-at-risk minimization.

At this stage it’s important to stress that revenue maximization does not necessarily mean maximization of captured price under a HO concept. The more hours are allocated to O&M works, the higher will be the captured price (because the revenue threshold is higher and lower revenue hours will be avoided) but the lower will be total revenue (because more hours of scheduled work equal to lower revenue generation). Therefore, it is critical to agree on a number of service hours that maximizes revenue without jeopardizing asset integrity. As an asset owner you should now focus on maximizing the number of spinning hours at maximum possible captured price.

But what added value potential can a revenue based KPI unfold? Figure 5 shows the results for an average offshore wind project in Germany and in the UK in 2018.

Several lessons can be learned from the above graphs. Firstly, that taking into account market prices in planning your project operations and maintenance provides for a considerable revenue upside  under a high intermittency scenario (or put it another way, there is a considerable revenue-at-risk by not taking into account market prices in your O&M strategy).

Secondly, the highest upside arises when implementing a very flexible and agile O&M hourly setup, where service hours can be deployed on a very short notice. As challenging as it may seem under current O&M industry practices, in Germany alone such a possibility would generate an additional revenue of 2.5M€ per year (for a 600MW project) with the levels of intermittency experienced in 2018.

Can such a KPI be easily implemented?

To some extent, yes. It is not much more difficult to compute the KPI than the Yield Based Availaiblity. There is not much difference than going from a timed based availability to a production based availability. Practical implementation however requires that the entire value chain thinks differently about planning and scheduling of O&M works.

Such activities may comprise scheduled service campaigns but also preventive maintenance activities for components for which the state of degradation is known from a condition monitoring system. As of today, scheduled maintenance work is mainly carried out sequentially according to the accessibility of the turbines. Limited accessibility is mainly driven by wind and waves but also visibility (fog), snowfall, heavy rain and technical factors such as failed vessels. In a subsidy-free future, O&M campaigns should start to factor in if a specific day/week is a “good day/week” for revenue (i.e. day-to-day work/no-work processes should be implemented).

To change behaviour, we recommend that operators of zero-subsidy (or other non-fixed revenue) projects start to measure “Revenue Based Availability” – what is not measured, cannot be managed!

Additionally, most other competences are already being used. Wind generation can be forecasted for the day-ahead with increasingly more robust wind forecast models. There is a monthly price seasonality that can be observed every year. Day-ahead markets set hourly prices for the following day during the evening, giving enough time to incorporate price dynamics into O&M working schedules. Although we are still far away from being able to detect sudden price changes on an hour-ahead basis (not to mention, unforeseen curtailment), the exposure to market prices is giving the right incentives to focus on developing these capabilities and get the additional revenue.

The exposure to higher pool price and production volatilities increases the project’s revenue-at-risk due to a higher intermittency effect. However, in such a setting, the value of a revenue-based availability KPI as a risk mitigation strategy increases.

With all this in mind, have you as a developer considered the connection between PPA mechanics and the underlying availability guarantee structure with your OEM providing service and maintenance?

Just reach out to us, we are always happy to answer your questions and get into discussions on optimized operations and asset management!